The Elegance of Simplicity: The Paintings of Ralph Iwamoto by Mark Pomilio

This essay is the result of an interview with Ralph Iwamoto in New York City, August 2007.

Traveling through life we often acquire more than we discard. Acquisition is the easier of the two. The clearing away of things…of ideas, or of life…takes time, consideration, thought, and potentially, harbors loss. But perhaps the expulsion process can be conceptually liberating. The freedom to express within a narrow constraint can be one that allows for a multitude of permutations, if the constraint is chosen in a manner that is not truly constrictive. This contradictive complexity is at work in the paintings of Ralph Iwamoto.

American born but of Japanese descent, Ralph Iwamoto was a teenager attending McKinley High School in Honolulu when the Japanese bombed Pearl Harbor. He climbed a tree and watched as history unfolded in the valley below. Many years later, on the morning of September 11, 2001, Ralph opened the window of his Greenwich Village twelfth floor apartment, and peered south to observe smoke and flames engulfing the Twin Towers. Experiencing these two dramatically historic events was life-changing; Ralph Iwamoto is surely one of just a handful of people to witness two of the most profound events in recent American history. These encounters carry a great deal of emotional weight -- weight which can be transformative and transferable. The best artists learn to integrate the pathos of life into their chosen art form, allowing it to find a home within the art itself. Often artists will express despair or joy in an explicit manner. This methodology has the potential of narrowing understanding or meaning into one reading, thus reducing the potential merit and audience. Luckily for us, Ralph Iwamoto is interested in universal communication.

Towards the close of the Second World-War, after serving two years in the Military Intelligence Service, Ralph Iwamoto migrated to New York City in pursuit of his dream of becoming an artist. The G.I. Bill allowed him to train for two years at the famed Art Students League. After the League, he took several odd jobs while continuing to pursue his painting. As he immersed himself in the diverse, energetic, and exploratory environment of the late 1950’s New York City art scene, he met individuals from all walks of life. This encouraged him to begin to evaluate his own unique and complex heritage. His outwardly Asian appearance frequently and inadvertently solicited questions from friends and acquaintances about his personal beliefs, such as, “tell me about Zen.” Iwamoto didn’t have a clear answer, even though both of his parents were practicing Buddhists. The Hawaii of Iwamoto’s youth in the 1930s and 1940s represented a fusion of Hawaiian, American and Japanese cultures. Iwamoto describes his experience at home as one of a “conflicting household.” The combination of Buddhist influences and his exposure to Christian philosophies at school, created a confusing mixture of discordant philosophical approaches in Iwamoto’s childhood. His parents chose to let him decide his own path, which ultimately did not lead to any specific religion. But rather, aided by his desire to meld his own cultural complexity, he developed a personal philosophy that is inclusive and accepting of all cultures.

The constant “Zen” question, coupled with a greater awareness and desire to achieve universal content within his art, pushed him to explore new modes of visual expression. Iwamoto’s diverse and multicultural upbringing made him eager to develop an art form that operated outside the traditions of both Western and Eastern pictorial models. This desire and its subsequent search was at the forefront of his thought, when a chance encounter profoundly altered his conception of art and picture-making, and ultimately yielded a new universal pictorial language. Iwamoto’s work during the 1950s reflected his interest in Surrealist ideas and imagery. In 1957, a friend told him that the Museum of Modern Art was hiring more guards as they prepared for a major Picasso retrospective. Iwamoto successfully attained the job and was stationed on the second floor of the museum. As Iwamoto reflects on this time, “I thought this was great! I got this job that allowed me to study the Surrealist paintings.” It is also probable that the Museum of Modern Art experience helped to further galvanize some of his surrealist convictions.

But most notably, at the museum he befriended several other young artists who were also working there as guards: Sol LeWitt, Robert Ryman and Dan Flavin. This group of individuals would later become known as the chief proponents and icons of a new artistic movement, dubbed Minimalism. Minimalism is a movement in the arts that grew and developed in post-war America in the late 1960’s and early 1970’s. It is defined by work which is stripped of all but its most fundamental and essential elements, and is rooted in the reductive features of Modernism. Within the realm of painting, the concepts of Minimalism encourage large, flat, geometric, hard-edged expanses of color, and work which is void of direct, overt subject matter. In Minimalism, Iwamoto saw a method and means by which he could express a universal “truth,” one which could encompass a wide and varied cultural audience through its simple elegance.

Iwamoto drifted away from Surrealism and began to work with geometrically shaped canvases, as were a few others at that time. Not wholly satisfied with the results, he questioned this approach and began to search for a motif that was unique. As he went through the possible geometric options, he became conscious of the fact that artists were already utilizing the most common forms: the square, the rectangle and the circle. In a rather matter-of-fact and “ah ha” moment, Iwamoto realized the octagon could be his alone. In that moment of simple clarity, Iwamoto found a motif that would ultimately occupy the breadth of his artistic output for nearly a quarter of a century.

Truly creative thoughts and acts have the potential of presenting themselves in unorthodox manners. It was Edison who, it is said, did not sleep -- but rather took cat naps throughout a given day. Legend has it that he would sleep with a mug in his hand as it dangled over the edge of his daybed. When he would enter a state of semi-consciousness, (a state revered for its ability to synthesize thought into creative solutions) his body would relax and inevitably, drop the mug, waking him. The waking at this critical time potentially allowed him to retain any thoughts he had during his semi-conscious state, and hopefully led him towards a reconciliation of the problem at hand.

We all have the capacity to be creative. Yet, it manifests differently in all of us, and we tend not to utilize its potential powers frequently enough. Only a few of us are open enough in our daily lives to use our inherent creative energies. Iwamoto says that his lack of being schooled in just one philosophical approach resulted in his ability to allow “openness” in his thinking and to accept the concepts of Minimalism as all-inclusive, rather than limiting. These concepts were not reductive in the traditional sense, but expansive in their ability to express a multitude of possible personal dictums. Furthermore, it is important to understand that Minimalism was not a readily accepted art form, and Iwamoto was an impassioned proponent of the movement at its inception. His leap into these uncharted waters represents a plunge into the unknown, one that few of us would have made at the time. Ultimately, this represents a brave act of creative freedom and awareness.

When Iwamoto said to himself, “the octagon -- eight sided, eight points – yes, that’s a good idea,” that geometric motif took control of his life. He started with a singular unit and later developed the “QuarOctagon”: four octagons set in a square, with one occupying each quadrant of the square. The QuarOctagon was followed by the nine-octagon motif, which became one of his most utilized systems and is represented by configuring the octagon in a three on top of three, on top of three, relationship. In the beginning, he worked primarily with the striking contrasts of black and white and later moved the paintings towards strong, beautifully calculated juxtapositions of complementary and secondary color arrangements.

These paintings represent the clarity of intent found in the work of a mature artist who has achieved a masterful synthesis of content and facility. This level of achievement is arrived at through arduous and devoted years of trial and error, and often, failure. It is said that failure is the building block of success. However, this path is one that few are brave enough to travel. Iwamoto has devoted his life to the difficult task of stripping away all that is inevitably acquired, and finding only that which is truly communicative and universal. Iwamoto’s gift is his ability to reconcile and remove all of life’s complexity and channel his energies into the reductive works of his signature pieces. The work in this exhibition may vary slightly from year-to-year and decade-to-decade, but all share Iwamoto’s ability to represent a simplicity of clear thought and elegance. This realization, with all of its magnificent visual manifestations, is not as effortless as it may appear. Iwamoto’s work requires us to sit with it and consider the face of less, not more.

Mark Pomilio is a Professor of Painting and Drawing within the School of Art, at Arizona State University’s Herberger Institute for Design and the Arts. 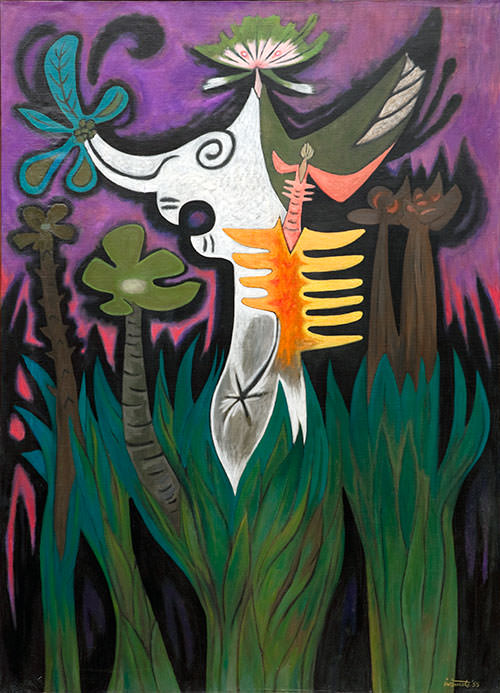